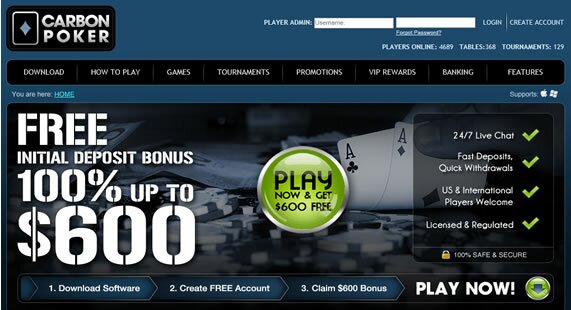 Carbon poker is one of the few poker gambling sites left that is still open to American poker players. Although the American government seems determined to smash any last resemblance of freedom. Carbon poker is coming to the rescue of our American cousins.

Carbon Poker runs on the Merge Gaming Network. Which is part of the old poker.com software and a new expanding feature base. You can play for free or real money and even play for free and win real money with Carbon Poker freeroll tournaments. Carbon poker was only re-launched in 2011 and is growing rapidly as the place to play for American players.

Along with all the usual features the newly launched Carbon Poker Gambling software has several interesting features. such as: "deal it twice".. Deal it twice comes from high stakes poker games where both players agree to run the play twice. This involves 2 players running the turn card and river card twice and the pot being split between the 2 hands. So the pot could be split 50/50 or still go to one player. Carbon also have a show 1 card feature so u can torment your opponents just like they do in live games.

Since the upgrade Carbon Poker gambling site runs smoothly with the ability to resize tables, view hand histories, chat, select preferred seating, view stats and can also replay a hand called "rabbit hunting". This rabbit hunting is a brand new feature and allows the winner to run the rest of the hand to see what the outcome would of been had the hand progressed to the river. This can help to show what would of happened if you played the hand differently. Although beware as it allows the other players to see what hole cards you were holding too.

Poker games available include Texas Holdem, Omaha Hi/Lo Hi, H.O.R.S.E, 7 Card Stud & Razz, 5 Card Stud, 5 Card Draw, Triple Draw & Badugi. There are around 800 ring game players for the cash games and around 5000 or so tournaments players. Carbon poker gambling isnt the biggest of poker networks yet. But with a growing American interest it is sure to pull in the crowds.

Casino games such as Blackjack, Caribbean Stud Poker, 3 types of video poker, Roulette and Backgammon are also available, but these are more side games as an added bonus to the poker software. Tournaments are growing in size and consist of regular sit n go, shootout, bounty and satellites into some major world events such as: WSOP & Aussie Millions.

New players are welcomed with a 100% cash match bonus upto $600 using Carbon Poker Bonus Code: UPTO600. All new depositing players will receive entry for 14 days into the carbon poker $500 Freerolls. You can also refer a friend to carbon poker and claim $25 free cash bonus and hit a royal flush in any texas holdem ring game and they will give you 100x the big blind free.

When poker gambling at Carbon Poker it is easy to see just how good the software and features are. The graphics are crisp using the latest vector software and audio sound is spot on. Check out one of the rising stars of online poker.